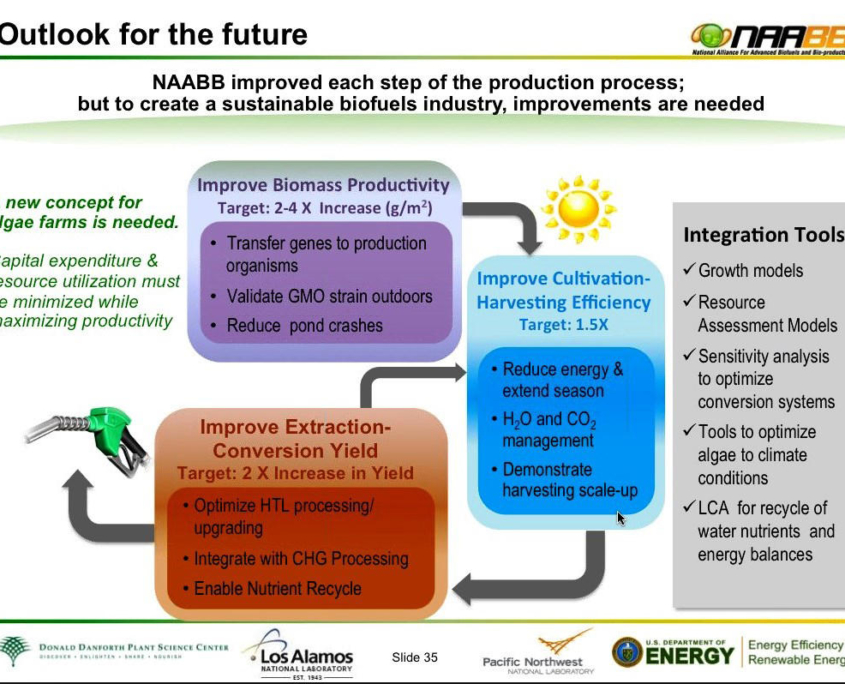 Algae and bacteria are the fastest growing organisms on our planet. A single algae cell can produce over one million daughter cells in one day. Is this fast enough? All algae producers are limited by sustainable biomass accumulation. Growth rates impact both capital and operational costs. A 20 percent increase in growth rate could give some growers a 30 percent increase in revenue.

Biological stimulation research began in the 1920’s, re-emerged in the 1950’s with the space race and continues today. Music and wine grapes provide an interesting parallel track. If music makes better wine, might sound, electronic or microwaves similarly stimulate algae?

Wine grape growers in Italy, South Africa, France, Washington and California play classical music to the vineyards to enhance growth rates and sugar production. The music equipment company Bose has sponsored music and wine research by providing their excellent speakers for placement in wine vineyards. The effect of sound on plants depends on frequency, intensity and exposure. In 2001, Chinese researchers found that low-frequency sound does not change cell structure but does activate enzymes, increases cell-membrane fluidity and promotes DNA replication and cell cycling.

Wine grape farmer Carlo Cignozzi equates music to fertilizer for grapes in his Al Paradiso di Frassina vineyard in Tuscany. He favors classical music such as Mozart and Tchaikovsky. He says music scares off animals that feed on young grapevines, as well as parasites, molds and bacteria. He calls music fantastic because bunches closest to the music grow grow faster, mature 10 days earlier and have higher the alcohol content. The results on his vineyard have been so impressive that Florence University has launched a research to scientifically validate them. Researchers will examine music versus silence and the response of the vines to different sound frequencies.

The DeMorgenzon web site proudly announces: “We pipe Baroque music through our vineyards 24×7 and believe that the power of music positively influences the ripening process.” The owner, Hylton Appelbaum in South Africa notes that his vines respond to a very particular style of classical music. Rock, pop, rap, techno and jazz do not have the same effect. His vines enjoy harmonious and melodious classical or wordless baroque music. He has observed that music stimulates the vines to grow more vigorously and to have more vitality. His vines exposed to music have a bigger surface area of leaves, which increases photosynthesis. Enhanced photosynthesis results in faster growth with higher sugar and flavor accumulation in the grapes.

Biological stimulation from electromagnetic fields and/or microwaves offers a novel technology that can accelerate algae growth substantially compared with natural sunlight. Laboratory tests at AlgaStar, Inc. and research collaborators at the University of Western Ontario, (UWO) have proven the biostimulation concept but considerably more research is needed. Additional research efforts are now funded for AlgaStar with Los Alamos National Laboratory. Additional grant applications and research sponsor funding will include Dr. Bruce Rittmann’s lab in the Biodesign Institute at ASU, the world class AzCATI Test Bed at ASU, NanoVoltaics, UWO and others.

The AlgaStar algae production and biostimulation system integrates two types of electromagnetic energy. The first is a millitesla generator and the second a millimeter microwave generator that radiates spontaneous growth energy into large volumes of algae biomass. The research teams have demonstrated that electromagnetic energy waves can provide an increase in algae biomass and its corresponding lipid oil production by up to 300 percent. 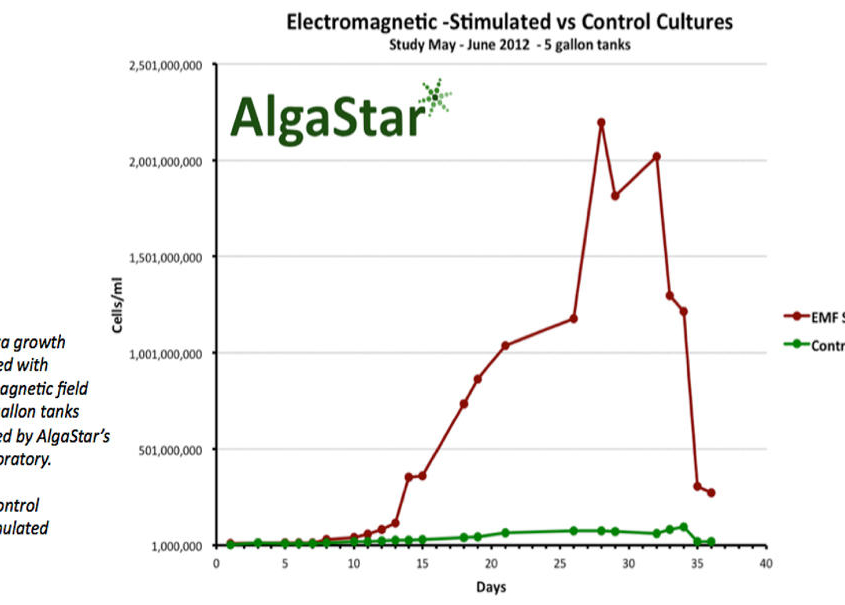 AlgaStar’s patented 4,500 gallon SolarMagnatronTM, biomass production system uses an automated biosystem controller, (ABC) which optimizes biomass production. The ABC can control the biostimulation EMF frequency and amplitude to optimize the algae growth cycle and substantially reduces the risk of culture crash. The ABC controls light, temperature, pH, nutrients and delivery of carbon dioxide to achieve optimal productivity. The ABC will allow the grower to harvest on precisely the schedule that maximizes growth such as 1 percent of the biomass every 15 minutes or 50 percent once a day. The ABC transforms the SolarMagnatronTM system into an adaptable microcrop platform that can mimic ideal growing conditions for many algae species as well as other microorganisms.

Want to join the discussion?
Feel free to contribute!